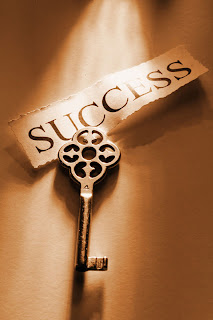 In reading Jeremiah, I am amazed by his godly success. His main message was "Turn now everyone from his evil way and from the evil of your deeds, and dwell on the land which the LORD has given to you and your forefathers forever and ever; and do not go after other gods to serve them and to worship them, and do not provoke Me to anger with the work of your hands, and I will do you no harm." (Jer 25:5-6).  Yet the people of Judah did not listen to him during his 23 years of ministry, warning them to turn from their evil ways and prophesying God's coming judgment. (Jer 25:3). Instead, they cursed him, mocked him, spoke arrogantly to him, beat him, abused him, imprisoned him in solitary confinement, and threatened him with death. Yet he continued to prophesy the Word of the Lord to them for another 18 years after that (Jer 52:12).

They never did listen to him. So they were carried in chains into exile in Babylon for 70 years, where they remained captive and fell by the sword, famine, and plague. Yet the Babylonians, who recognized him as a true prophet of God, treated Jeremiah kindly. And he was spared from going into exile. “Now Nebuchadnezzar king of Babylon gave orders about Jeremiah through Nebuzaradan the captain of the bodyguard, saying, ‘Take him and look after him, and do nothing harmful to him, but rather deal with him just as he tells you.’” (Jer 39:11-12). It may not look like success to the world, but let's see someone try to top that!

Jeremiah has touched more people since his death than he did during his lifetime. There were about 4,600 people from Judah who went into Babylonian captivity (Jer 52:30). That was his audience. But since his death around 2,500 years ago, his writings have been translated into over 2,000 languages and read by hundreds of millions of people around the world! His writings have encouraged many, led some of those people to repentance, helped many to persevere through trials, and others to a closer walk with God. That goes to show us that we can't base our sense of success on what we see in the natural during our lifetime. Instead we should serve the Lord with our whole heart in obedience to His commands, and trust that He will bring forth fruit for His glory that will last long after we're gone from this world.

Many Christians will gladly receive false prophets who predict good times ahead, peace and safety. The apostle Paul warned that “While they are saying, ‘Peace and safety!’ then destruction will come upon them suddenly like labor pains upon a woman with child, and they will not escape.” (1Th 5:3). There are plenty of prophets like this. But they usually practice deceit (Jer 8:10). Both prophet and priest are polluted (Jer 23:11). Jeremiah gave us the real test of a true prophet. "The prophet who prophesies of peace, when the word of the prophet comes to pass, then that prophet will be known as one whom the LORD has truly sent." (Jer 28:9).

Historically, the religious people have persecuted God’s true prophets. It would not surprise me if non-believers have greater respect for God's true prophets than do the sons and daughters of light. Jesus said that if anyone receives a prophet in the name of a prophet, he would receive a prophet's reward (Mt 10:41). Ebed-Melech was a good example. He was a Cushite from the Nile region who helped get Jeremiah out of the cistern (Jer 38:8-9). Later he received a reward (Jer 39:15-17). And if they receive a righteous man in the name of a righteous man, they will receive a righteous man's reward. Jesus said that if they receive true disciple, then in doing so they also receive Jesus Himself. And if they receive Jesus, they receive the Father who sent Him (Mt 10:40).

Look at the people of Nineveh for example.  These non-believing Gentiles received Jonah as a true prophet and their reward was that God spared their city.  There were 120,000 children in that great city, which didn’t know their right hand from their left, plus adults and animals (Jon 4:11).  That was a real success!

I love the book of Jonah, because it’s a true story of mercy and compassion.  He had a mission to go and preach to people who were enemies of Israel.  The message was that they needed to repent, because Nineveh would be destroyed in 40 days.  Many Christians today would say we don’t need that kind of preaching.  They would say that it’s doom and gloom, and that we need more preaching on love and grace.

But I see it just the opposite. The whole reason that God sent the prophet Jonah to Nineveh was that He did not want to have to destroy them.  But God was going to have to destroy them, if they did not repent of their wickedness.  The only obstacle was that Jonah knew that God would mercifully spare them, if they repented.  He did not want to see these enemies of Israel spared.  In fact, after the whole city, from the king to the most lowly person repented, and God spared them from destruction, Jonah confessed to God why He ran from his mission.  “He prayed to the LORD and said, ‘Please LORD, was not this what I said while I was still in my own country? Therefore in order to forestall this I fled to Tarshish, for I knew that You are a gracious and compassionate God, slow to anger and abundant in lovingkindness, and one who relents concerning calamity.’” (Jon 4:2).

Then there was also the mercy that God showed to Jonah himself.  When God told Jonah to go to Nineveh to preach, he ran from God and went in the opposite direction, away from Nineveh.  But the ship he was on encountered a huge storm that nearly sank it. It was only when they threw Jonah overboard that the storm ceased.  And God in His mercy sent a big fish to swallow Jonah.  It was there in the belly of the fish that Jonah himself repented.  God forgave him and had mercy on Him, giving him a second chance to complete the mission. The Lord knew before He sent Jonah that this would happen, and He intended on being merciful to Jonah. God also intended on being merciful to the Ninevites before He sent Jonah to preach to them.  And in the end, the Lord was merciful to Jonah and the Ninevites.

So rather than doom and gloom, this was a real story of mercy and compassion in every respect, for those who have ears to hear.  Maybe the church today needs more preaching of repentance, faith and forgiveness.  Those who do preach this message are in good company with people like Jeremiah, Jonah, Jesus, and John the Baptist.

However, preachers may be afraid that they will lose people, by proclaiming this message.  It’s true that often times the so-called believers don’t receive the servants of God sent to them. So if you’re concerned about rejection, the prospects of this could scare you away from this kind of preaching.  It’s not for the faint of heart.

Jesus only had one apostle and a few women who remained with Him to the end, during His crucifixion.  The rest were scattered.  The apostle Paul, at the end of his life said, "At my first defense no one supported me, but all deserted me; may it not be counted against them." (2Ti 4:16) In some of the places where Paul made disciples and established churches, those same places are dominated by Islam today with barely a trace of Christian faith present.

But those who are obedient to the Lord in preaching the full gospel of repentance and faith in Jesus Christ will receive a rich reward.  Their ministry may seem like a dismal failure in man’s eyes, but that’s not what God looks at. They may not draw large crowds, but they are truly successful in God’s eyes.  And the fruit they bring forth will be the kind that lasts!

Len Lacroix is the founder of Doulos Missions International.  He was based in Eastern Europe for four years, making disciples, as well as helping leaders to be more effective at making disciples who multiply, developing leaders who multiply, with the ultimate goal of planting churches that multiply. His ministry is now based in the United States with the same goal of helping fulfill the Great Commission. www.dmiworld.org.
Posted by Len at 2:00 PM No comments: