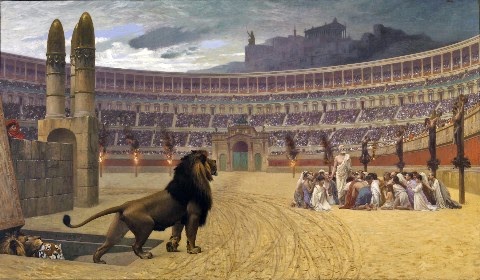 A servant of the Lord is supposed to preach the Word, preach Christ, and Him crucified, preach against sin, and warn people of the dangers of hell, so they don't perish.  But whenever anyone does this, they should not expect to be popular.  In fact, they will be persecuted as the prophets were, and as our Lord Jesus Himself was.

In fact, true preachers of righteousness, holiness, and truth may be considered raving mad. This is just like what Jesus’ kinsmen said of him.  “When His own people heard of this, they went out to take custody of Him; for they were saying, ‘He has lost His senses.’” (Mar 3:21, NASB). Other translations have them saying, “He is insane” (MKJV), “He is out of his mind” (Darby, ESV, GW translations), or “He’s gone mad!” (GNB). The Greek word here, existemi, means “insane” or “out of one’s wits” or “be beside oneself.”  This is how his kinsmen, or blood relatives, spoke of Him.

Matthew Henry stated: “When his friends in Capernaum heard how he was followed, and what pains he took, they went out, to lay hold on him, and fetch him home, for they said, He is beside himself. 1. Some understand it of an absurd preposterous care, which had more in it of reproach to him than of respect; and so we must take it as we read it, He is beside himself; either they suspected it themselves, or it was suggested to them, and they gave credit to the suggestion, that he was gone distracted, and therefore his friends ought to bind him, and put him in a dark room, to bring him to his right mind again. His kindred, many of them, had mean thoughts of him (Joh_7:5), and were willing to hearken to this ill construction which some put upon his great zeal, and to conclude him crazed in his intellects, and under that pretence to take him off from his work. The prophets were called mad fellows, 2Ki_9:11.”

That was the same incident in which the scribes came down from Jerusalem saying, “He is possessed by Beelzebul” (the high priest of satan, the ruler of demons). For they were saying, "He has an unclean spirit." (Mk 3:22,30).

According to John’s gospel, this was not the only time that happened.  It also happened when He preached about being the Good Shepherd.  Many of them said, “He is demon-possessed and raving mad!” (Jn 10:20, NIV).  Another version says, “He has a demon and is insane!” (Jn 10:20 , NASB).  The Greek word for insane in this verse is “mainomai” meaning “to rave as a ‘maniac’: - be beside self (mad).” (Strongs).

Family were saying he was crazy and the religious leaders said he was demon-possessed and insane.  As Matthew Henry commented: “…they insinuated that he had Beelzebub on his side, was in league with him, and by the prince of the devils cast out devils.”

That was why Jesus warned them: "Truly I say to you, all sins shall be forgiven the sons of men, and whatever blasphemies they utter; but whoever blasphemes against the Holy Spirit never has forgiveness, but is guilty of an eternal sin"-- because they were saying, "He has an unclean spirit." (Mar 3:28-30). So you'd better be careful what you say about preachers of righteousness, holiness, and truth.

Can you imagine someone thinking they know God so well that when they actually see God in Person in the form of His Holy Son, Jesus Christ, they say, "That man is demon possessed!" or "He's out of his mind!"  Such men were blaspheming the Holy Spirit. The same thing happens today when people say such things about those who preach holiness, righteousness, and truth.

And if you are such a preacher, take heart.   Our Lord Jesus said, "A disciple is not above his teacher, nor a slave above his master. It is enough for the disciple that he become like his teacher, and the slave like his master. If they have called the head of the house Beelzebul, how much more will they malign the members of his household! Therefore do not fear them, for there is nothing concealed that will not be revealed, or hidden that will not be known. What I tell you in the darkness, speak in the light; and what you hear whispered in your ear, proclaim upon the housetops. Do not fear those who kill the body but are unable to kill the soul; but rather fear Him who is able to destroy both soul and body in hell." (Mat 10:24-28).

Do not fear what men say of you or what they are able to do to you.  But fear the Lord and speak whatever the Lord gives you to say.  What He tells you in the darkness, speak in the light.  What you hear Him whisper in your ear, proclaim upon the housetops.

The apostle Paul did that, and he was well-acquainted with persecution, even being accused of insanity. While he was making his defense before Festus, the King said in a loud voice, "'Paul, you are out of your mind! Your great learning is driving you mad.' But Paul said, 'I am not out of my mind, most excellent Festus, but I utter words of sober truth.'" (Act 26:24-25)

Some preachers avoid preaching the Word just as it is written, and avoid difficult messages, because they want to be liked by people. Jesus said, "Woe to you when all men speak well of you, for their fathers used to treat the false prophets in the same way." (Luk 6:26)

Let me encourage you that any persecution you may be going through for the Lord is a badge of honor. You should be glad for it, if people are saying you are crazy.  Jesus said, "Blessed are you when people insult you and persecute you, and falsely say all kinds of evil against you because of Me. Rejoice and be glad, for your reward in heaven is great; for in the same way they persecuted the prophets who were before you." (Mat 5:11-12).

In the words of the apostle Paul, I solemnly charge you in the presence of God and of Christ Jesus, who is to judge the living and the dead, and by His appearing and His kingdom: preach the word; be ready in season and out of season; reprove, rebuke, exhort, with great patience and instruction. For the time will come when they will not endure sound doctrine; but wanting to have their ears tickled, they will accumulate for themselves teachers in accordance to their own desires, and will turn away their ears from the truth and will turn aside to myths. (2Ti 4:1-4)

Image credit:  "The Christian Martyr's Last Prayer" by Jean-Léon Gérôme - Walters Art Museum, image taken from Wikimedia Commons.  William T. Walters commissioned this painting in 1863, but the artist did not deliver it until 20 years later. In a letter to Walters, Gérôme identified the setting as ancient Rome's racecourse, the Circus Maximus. He noted such details as the goal posts and the chariot tracks in the dirt. The artist also commented on the religious fortitude of the victims who were about to suffer martyrdom either by being devoured by the wild beasts or by being smeared with pitch and set ablaze. In the painting, you can see one martyr standing and praying in the midst of other kneeling saints huddled in prayer, and others are hung on crosses about to be burned alive.

Attribution notice: Most Scripture quotations taken from the NASB. Most other Scriptures taken from The Holy Bible, New International Version® NIV®, unless otherwise noted.

Author's note:  If you enjoyed this post, you may also like the other posts in this blog available through the links in the side bar, such as Success in God's Eyes. I also recommend Obedient to the Heavenly Vision, Holding Fast the Faithful Word, Confrontational Evangelism, The Rise of Antichrists, The Top Ten Things Jesus Taught, Sins That Will Keep You From Heaven, Popularity of the Gospel, Ask for the Ancient Paths, The Knowledge of the Holy, Separation from the World, Ultimate Accountability, Avoid Becoming a Corrupted Christian, The Cost of Discipleship, A Warning for Married Christian Couples , The Judgment Seat of Christ, Messages from the Lord for Catholics Worshipping Idols, Alcohol and Cigarettes -- Ten Divine Revelations, Godly Attire and Adornment -- Seven Divine Revelations, and Rock, Rap, and Reggae Music -- Three Divine Revelations. You may also access my complete blog directory at "Writing for the Master."

Len Lacroix is the founder of Doulos Missions International.  He was based in Eastern Europe for four years, making disciples, as well as helping leaders to be more effective at making disciples who multiply, developing leaders who multiply, with the ultimate goal of planting churches that multiply. His ministry is now based in the United States with the same goal of helping fulfill the Great Commission. www.dmiworld.org.
Posted by Len at 8:14 AM No comments: