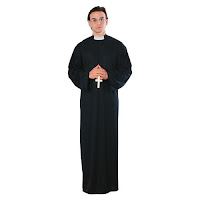 Even though the Reformation occurred almost 500 years ago, we still see unbiblical divisions in the Church today. One of those is the distinction between clergy and laity.


Clergy comes from a Latin word, meaning clerk. It’s used today to refer to the body of people ordained for religious service. It refers to those who are ordained religious practitioners, such as priests, ministers, pastors, bishops, cardinals, chaplains, or any prelates ruling in the Church.

For those who recognize this as a separate class of Christian people, all those who are not clergy are referred to as laity. The word laity refers to members of a religious community that do not have the priestly responsibilities of ordained clergy.

We don’t find these terms clergy and laity in the Bible, nor do we find the distinction between two such classes.

Overseers and Elders
In God’s Word, we do find that the Lord gave gifts to the Church, for the purpose of building up and equipping the Church. According to the apostle Paul, these are called apostles, teachers, pastors, prophets, and evangelists (Eph 4:20). These people are supposed to be equipping God’s people for works of service, so that they too can serve.


The New Testament Bible also refers to elders or overseers. The apostle Paul said that if any man desires to be an overseer, it is a fine work he desires (1 Tim 3:1). This word overseer comes from the Greek word episkopos, which means one who oversees. Paul described the qualifications for overseers in this same third chapter of his letter to Timothy.

Another term for overseer is an elder. Elder comes from the Greek word presbuteros, which means older, senior, or simply elder. In the context of Paul’s writings, it is clear that elders and overseers are two words for the same function. They simply describe different aspects of the same role. Peter wrote to the elders, referring to himself as a fellow elder (1 Pet 5:1). So he considered himself an elder also, even though he was also an apostle. He states that an elder should “shepherd the flock of God, exercising oversight.” (1 Pet 5:2). Since an elder shepherds the flock and provides oversight, it is obvious that he is an overseer by definition.

So when we read the New Testament in context, we see that elders or overseers are either pastors, teachers, apostles, prophets, or evangelists. The head is our Chief Shepherd, Jesus Christ. Peter wrote to the elders saying, “And when the Chief Shepherd appears, you will receive the unfading crown of glory.” (1Pe 5:4)

Reasons Why Clergy is an unbiblical term
There are three basic reasons why the concept of clergy must be dismissed as unbiblical.

1. First, all disciples in the kingdom of God are priests. A priest, according to the Word of God, is one who represents men before Almighty God and performs a holy service in God’s house. In John’s Revelation, he wrote: “He has made us to be a kingdom, priests to His God and Father--to Him be the glory and the dominion forever and ever. Amen.” (Rev 1:6).

The apostle Peter agreed with this when he wrote: “You also, as living stones, are being built up as a spiritual house for a holy priesthood, to offer up spiritual sacrifices acceptable to God through Jesus Christ.” (1Pe 2:5). Peter went on to write: “But you are a chosen race, A royal priesthood, a holy nation, a people for God's own possession, so that you may proclaim the excellencies of Him who has called you out of darkness into His marvelous light; for you once were not a people, but now you are the people of God; you had not received mercy, but now you have received mercy.” (1Pe 2:9-10).

So Scripture teaches that all believers are priests and are part of God’s holy priesthood. The spiritual sacrifice we offer is our own body, and the service we perform is to proclaim the excellencies of Christ. The term priest is not reserved for a select few individuals, but is used for all disciples in the kingdom of God.

2. Secondly, we have only One Leader, and His name is Jesus Christ. Jesus Himself taught us not to use titles like “Father,” “Leader,” or “Rabbi” to distinguish ourselves or set ourselves apart from other believers. He said, "But do not be called Rabbi; for One is your Teacher, and you are all brothers. Do not call anyone on earth your father; for One is your Father, He who is in heaven. Do not be called leaders; for One is your Leader, that is, Christ. But the greatest among you shall be your servant.” (Mat 23:8-11). So we should not use the titles “Father,” "Teacher," or "Leader," when addressing those who serve in equipping ministries, since we are all brothers. We shouldn’t let anyone address us with titles and we should not address anyone with titles. Rather, we must walk in humility.

You will not find one single instance in the Bible where any of the apostles put the word "apostle" in front of their name as a title. Peter was simply called "Peter" by others, and that is what he called himself. Likewise, Paul was called "Paul" by others, and that is what he called himself. He was "Paul, an apostle", not "Apostle Paul." The same was true of James, John, and all the other apostles. Moreover, there is not one instance in Scripture where someone was called with the title "Pastor" in front of his name. It does not exist. The same is true of other big titles like "Bishop," "Archbishop," "Reverend," "Right Reverend," etc. Therefore, anyone who uses titles like this has no biblical basis for it. In fact, they are disobeying the Lord's command not to use titles.

He teaches in this passage that the Body is not made up of just one member who does everything. Yet many churches operate like this where everything depends on the pastor. Paul taught that there are a variety of gifts given for the common good. They are distributed to the various members of the Body as He wills, so they can use them in their priestly service.

The apostle Paul affirmed this also. He wrote to the Corinthians, “Now I exhort you, brethren, by the name of our Lord Jesus Christ, that you all agree and that there be no divisions among you, but that you be made complete in the same mind and in the same judgment.” (1Co 1:10).


Yet how many times do you see in a Christian gathering that the clergy get front row seats? Or there is special reserved seating for clergy. Why do men do this?
James taught us not to make distinctions among ourselves when he wrote: “My brethren, do not hold your faith in our glorious Lord Jesus Christ with an attitude of personal favoritism. For if a man comes into your assembly with a gold ring and dressed in fine clothes, and there also comes in a poor man in dirty clothes, and you pay special attention to the one who is wearing the fine clothes, and say, ‘You sit here in a good place,’ and you say to the poor man, ‘You stand over there, or sit down by my footstool,’ have you not made distinctions among yourselves, and become judges with evil motives?” (Jam 2:1-4). One might consider that if an elder is supposed to be functioning in oversight, he is better positioned to do so while seated among the people, rather than from the front in a seat of honor, as though he were above everyone else.

If a man is serving as an elder in the role of a pastor, teacher, apostle, prophet or evangelist, then others will know it. He does not need to wear a title to let everyone know. The key is that he must be serving. This is what Jesus taught.

Putting it All Together
While many people today still make a distinction among Christians between clergy and laity, it’s unbiblical. If we claim to follow the Word of God as our sole rule of faith, then we should do away with such distinctions. They only serve to create divisions and exalt men above others.

Instead we should exalt our Lord Jesus Christ, the Head of the Body, the Chief Shepherd of the flock. Let’s humble ourselves before the mighty hand of God and repent of this practice. Let's restore Jesus Christ to His rightful place in the Church as our One Leader.

Author's note: If you enjoyed this post, I recommend reading The Priesthood of All Believers and How to Treat Leaders. You may also like the other posts in this blog available through the Home page. You may also access my complete blog directory at "Writing for the Master."

Len Lacroix is the founder of Doulos Missions International.  He was based in Eastern Europe for four years, making disciples, as well as helping leaders to be more effective at making disciples who multiply, developing leaders who multiply, with the ultimate goal of planting churches that multiply. His ministry is now based in the United States with the same goal of helping fulfill the Great Commission. www.dmiworld.org.
Posted by Len at 5:41 AM