The Lord, Our Shepherd 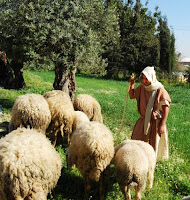 Why is a shepherd important? I mean, you've got your iPhone in your pocket and you're just a touch away from internet access at all times. You can call or email anyone you want from anywhere there's cell phone access. You've got your wireless laptop and your GPS to guide you to any point on the planet. Aren't shepherds sort of obsolete? These days, it's hard to see why we need one when we're all so self-sufficient and hi-tech.

I'd like to show you in God's Word exactly why a shepherd is so important. Specifically, let's look at the difference between the shepherd's role and the sheep's role.

The Good Shepherd’s Role
First let's look at the role of the good shepherd.

He is the Door we must enter through
"But he who enters by the door is a shepherd of the sheep.” (Joh 10:2)

He saves the sheep
"I am the door; if anyone enters through Me, he will be saved, and will go in and out and find pasture.” (Joh 10:9)

He goes ahead of his sheep and leads them
"When he puts forth all his own, he goes ahead of them, and the sheep follow him because they know his voice.” (Joh 10:4)

He puts forth his own
"When he puts forth all his own, he goes ahead of them, and the sheep follow him because they know his voice.” (Joh 10:4)

He searches for the lost and seeks them out
For thus says the Lord GOD, "Behold, I Myself will search for My sheep and seek them out. (Eze 34:11)

He cares for the sheep and delivers them
"As a shepherd cares for his herd in the day when he is among his scattered sheep, so I will care for My sheep and will deliver them from all the places to which they were scattered on a cloudy and gloomy day.” (Eze 34:12)

"Also the tree of the field will yield its fruit and the earth will yield its increase, and they will be secure on their land. Then they will know that I am the LORD, when I have broken the bars of their yoke and have delivered them from the hand of those who enslaved them.” (Eze 34:27)

He restores the sheep
“He restores my soul; He guides me in the paths of righteousness For His name's sake.” (Psa 23:3)

He seeks the lost sheep
"I will seek the lost, bring back the scattered, bind up the broken and strengthen the sick; but the fat and the strong I will destroy. I will feed them with judgment.” (Eze 34:16)

He provides an abundant life for His sheep
"The thief comes only to steal and kill and destroy; I came that they may have life, and have it abundantly.” (Joh 10:10)

He gives His sheep eternal life
“I give eternal life to them, and they will never perish; and no one will snatch them out of My hand.” (Joh 10:28)

The Sheep’s Role
Now that we've looked at the shepherd's role, let's see what the sheep's role is. Notice how simple it is. There's nothing complicated about it.

The sheep must hear the voice of their shepherd
"My sheep hear My voice, and I know them, and they follow Me.” (Joh 10:27)

"To him the doorkeeper opens, and the sheep hear his voice, and he calls his own sheep by name and leads them out.” (Joh 10:3)

The sheep must not only hear but know the shepherd’s voice
"When he puts forth all his own, he goes ahead of them, and the sheep follow him because they know his voice.” (Joh 10:4)

The sheep must enter through the door
"I am the door; if anyone enters through Me, he will be saved, and will go in and out and find pasture. (Joh 10:9)

The sheep must find pasture
"I am the door; if anyone enters through Me, he will be saved, and will go in and out and find pasture. (Joh 10:9)

So there was not much to the sheep's role, was there! That's because sheep are rather simple and can't handle anything too complicated.

The Nature of a Bad Shepherd
Now let's explore the nature of a bad shepherd. By doing this, it really helps emphasize how good the Good Shepherd really is. We need to see this, because we often take for granted what Jesus does for the sheep. Here are some aspects of a bad shepherd.

He uses the sheep for his own gain
"You eat the fat and clothe yourselves with the wool, you slaughter the fat sheep without feeding the flock.” (Eze 34:3)

Putting it All Together
There are many godly pastors who serve like the Good Shepherd. Thank the Lord for them. Unfortunately, some pastors of churches operate like bad shepherds. For many people, this is all they have ever seen or known in a shepherd. This has caused a lot of damage to people around the world. As a result, many of them refuse to ever go back to a church again. Others have found a safe place, where they are being cared for and getting healed.

But Jesus is good all the time. He strengthens the sickly sheep, He heals the sick ones, He binds up the broken ones, He brings back the ones that are scattered, and He seeks the lost ones. He saves the sheep from perishing. He knows His sheep and calls his own sheep by name, because He has a loving relationship with them. He goes ahead of his sheep and leads them, rather than driving them along. He puts forth his own. He has lain down His life for His sheep. He provides an abundant life for His sheep, and gives them eternal life.

This figure of speech using the shepherd and the sheep is used often in Scripture to show the relationship between God and His people. The prophet Ezekiel wrote: "As for you, My sheep, the sheep of My pasture, you are men, and I am your God," declares the Lord GOD. (Eze 34:31)

So what is our role as sheep? It’s not complicated, as some would try to make it. First of all the sheep must enter through Jesus, the Door. There is no other way to enter the fold. The sheep must know Jesus, the Good Shepherd. It’s a relationship with Him, not a set of religious ceremonies and rituals. The sheep must hear the voice of Jesus and know His voice. This can only happen when you spend time with Him and get to know Him through His Word and prayer, listening for His still, small voice inside your heart speaking to you. The sheep must find pasture. The Lord will lead us to green pastures, but we need to then find the pasture He has led us to and we must feed in that place – not the place of our own choosing. When we do, we experience the abundant life He gives.

Maybe you are reading this and you do not know Him well. You don’t really hear His voice, because you have never come to know His voice. You have been trained to hear man’s voice. As a result, you’ve not been following Him like you should. He’s calling you to Himself today. He’s calling you to a place of intimacy with Him, where you are close to Him and know Him well. But you need to respond and draw near to Him.

He is the Door and you need to begin by entering through Him. Have you done that? If you have, but you’ve left the fold, come back today. If you have never entered the Door, you can enter today.


Please see my explanation of this in my post called "Do You Want to Know Jesus?"